Paris, I Love You 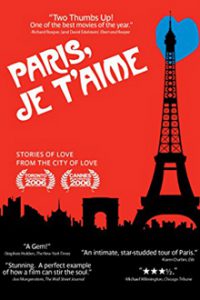 Paris, je t’aime is a collection of 18 vignettes set in Paris.   It is a 2006 anthology film starring an ensemble cast of actors of various nationalities. The two-hour film consists of eighteen short films set in different arrondissements (districts).  In “Bastille,” a man (Sergio Castellitto) considers leaving his wife (Miranda Richardson) for his mistress (Leonor Watling). A cowboy (Willem Dafoe) rides at midnight to comfort a woman (Juliette Binoche) who lost her son in “Place des Victoires.” In “Fauborg Saint-Denis,” an American actress (Natalie Portman) wants to break off her romance with a blind student.  The 18 moments are fused by transitional sequences in addition to the introduction and epilogue. Each transition begins with the last shot of the previous film and ends with the first shot of the following film, extending the enchantment and the emotion of the previous segment, preparing the audience for a surprise, and providing a cohesive atmosphere. There’s a reappearing mysterious character who is a witness to the Parisian life and the common theme of Paris where love fuses all.