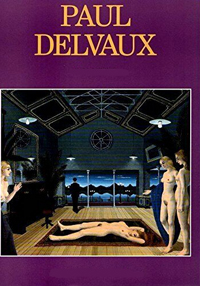 Paul Delvaux was a Belgian painter noted for his dream-like scenes of women, classical architecture, trains and train stations, and skeletons, often in combination. He is often considered a surrealist, although he only briefly identified with the Surrealist movement. He was influenced by the works of Giorgio de Chirico and René Magritte, but developed his own fantastical subjects and hyper-realistic styling, combining the detailed classical beauty of academic painting with the bizarre juxtapositions of surrealism.  Throughout his long career, Delvaux explored “Nude and skeleton, the clothed and the unclothed, male and female, desire and horror, eroticism and death – Delvaux’s major anxieties, and the greater themes of his later work.  (In English)