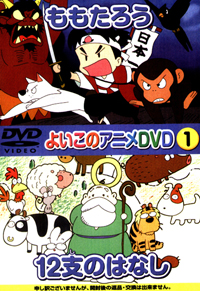 Momotarō was born from a giant peach, which was found floating down a river by an old, childless woman who was washing clothes there. The woman and her husband discovered the child when they tried to open the peach to eat it. The child explained that he had been bestowed by the Gods to be their son. The couple named him Momotarō, from momo (peach) and tarō (eldest son in the family). When he was just five years old, he was able to cut a big tree with just an old knife

When he matured into adolescence, Momotarō left his parents to fight a band of Oni (demons or ogres) who marauded over their land, by seeking them out in the distant island where they dwelled (a place called Onigashima or “Demon Island”). En route, Momotarō met and befriended a talking dog, monkey and pheasant, who agreed to help him in his quest in exchange for a portion of his rations (kibi dango or “millet dumplings”). At the island, Momotarō and his animal friends penetrated the demons’ fort and beat the band of demons into surrendering. Momotarō and his new friends returned home with the demons’ plundered treasure and the demon chief as a captive.