Peculiarities of the National Hunt in the Winter 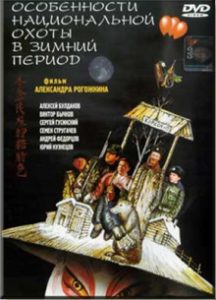 Kuzmich and Semyonov feel bored at the 13th cordon until the season of “checks” and “inspections” begins. The first inspectors are from the Ministry of Forestry, followed by two more from the environmental department. The heroes even have to drink tea for a while since the environmental leader is a teetotal lady who also hates hunting. Later, Leva Soloveichik and General Ivolgin join the company. As always the company survives a lot of absurd but completely legitimate adventures. The philosophical story-parable compiled by Kuzmich about the Chinese hunter Hu Zhou who comprehends all the secrets of Russian hunting and tries to understand the Russian soul, is carried throughout the storyline.