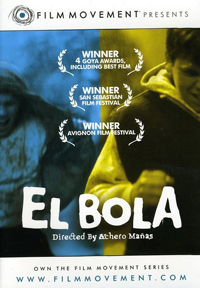 Twelve-year-old Pablo aka Pellet is stuck in a deeply abusive home ruled by his tyrannical father when he meets a new classmate, Alfredo, who befriends Pablo and introduces him to a kinder, gentler version of family life. That life is personified by Alfredo’s fun-loving Bohemian father, José. After being caught in the rain following a fun family outing with Alfredo’s family, Pablo’s dark secret is revealed when Alfredo sees the bruises and scars on Pablo’s body. Pablo refuses to discuss it and tells Alfredo that he fell but Alfredo doesn’t believe him and tells his own parents. Pablo does not come to school for a week and Alfredo and his family become deeply concerned for him, but Pablo is too afraid to confess that his father has been beating him.

One day, Pablo decides he has had enough and stands up to his father and is severely beaten in return. Pablo runs away from home and to the home of his friend Alfredo. Alfredo’s parents take him to the hospital for treatment and promise they will watch over him and won’t allow his father access to him. But a family friend tells Alfredo’s parents that Pablo’s dad could press kidnapping charges against them so they decide to call Pablo’s father and tell him where he is. When Pablo finds out, he runs away and finally ends up telling social services about the abuse.