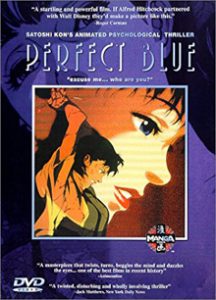 The film follows Mima Kirigoe, a member of a Japanese idol group, who retires from music to pursue an acting career. As she becomes a victim of stalking, gruesome murders begin to occur, and Mima starts to lose her grip on reality. Like much of Kon’s later work, such as Paprika, the film deals with the blurring of the lines between fantasy and reality in contemporary Japan.