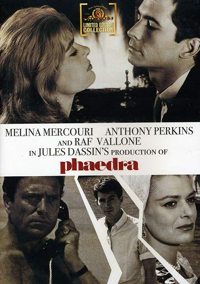 Phaedra (Melina Mercouri) is sent by her wealthy older husband, Thanos (Raf Vallone), to London in order to bring his son from a previous marriage, Alexis (Anthony Perkins), home for the summer. After Phaedra meets Alexis, they fall in love and embark on an affair. Alexis returns to Greece but feels consumed by guilt about the situation. When Thanos tries to arrange a marriage for him, it brings out jealousy in Phaedra that leads to a tragic series of events.