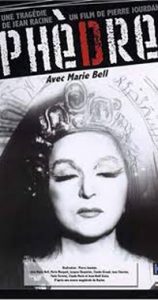 In the absence of her royal husband, Theseus, thought to be dead, Phèdre declares her love to Hippolyte, Theseus’s son from a previous marriage.   Marie Bell enacts the role of the tormented Phèdre, enamored of her stepson Hippolyte (Claude Giraud). He in turn loves Aricie (Tania Torrens), a captive. When king Theseus (Jacques Dacqmine) who is father to Hippolyte and husband of Phèdre, proves to be alive, tragedy takes its toll.