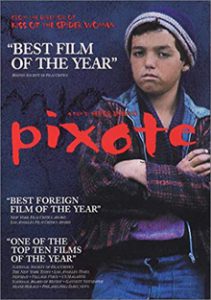 Homeless adolescent Pixote (Fernando Ramos Da Silva) finds himself thrown into a juvenile prison in a roundup of São Paulo’s street children. The prison is a nightmarish world where sadistic guards torture and murder the young inmates. Fleeing with a transgendered fellow inmate named Lilica (Jorge Juliao) and her boyfriend, Dito (Gilberto Moura), Pixote journeys to the streets of Rio de Janeiro and becomes enmeshed in an underworld of drugs and violence.  It is a documentary-like account of Brazil’s delinquent youth and how they are used by corrupt police and other crime organizations to commit crimes. The film features Fernando Ramos da Silva (who was killed at the age of 19 by Brazilian police in São Paulo) as Pixote. The plot revolves around Pixote, a young boy who is used as a child criminal in muggings and drug transport.