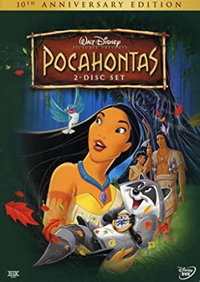 Pocahontas is a 1995 American animated musical comedy romance-drama film released by Walt Disney Animation Studios. It is the 33rd full-length animated feature film in the Disney Animated Canon and the sixth film in the Disney Renaissance. The film is the first animated feature Disney film to be based on a real historic character, the known history, and the folklore and legend that surrounds the Native American woman Pocahontas, and features a fictionalized account of her encounter with Englishman John Smith and the settlers that arrived from the Virginia Company.

The British settlers land in what will become Virginia and dig for gold under Governor Ratcliffe’s orders. Less concerned with gold, John Smith explores the territory, finding the new world to be a place full of adventure. All the time he is followed by the curious Pocahontas and comes to encounter her. The two spend time together, with Pocahontas teaching John to look at the world in a different way, and to not think of people who are different as ‘savages’. Back at the settlement, Powhatan has sent some scouts to learn more about the new arrivals, but they are spotted. Governor Ratcliffe assumes that it is an ambush, and one of the warriors is shot. The warriors retreat and Powhatan declares that the white men are dangerous and that no one should go near them.