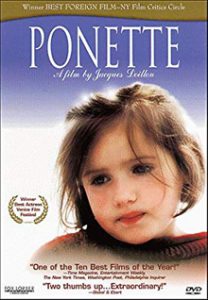 An extremely captivating movie on how a little girl copes with her mother’s death. She withdraws from all the people around her, waiting for her mother to come back. She tries waiting, and when her mother still doesn’t appear, tries magic chants, praying to God, and then becoming a child of God, to have some power over Him.  In the end, 4-year-old Ponette (Victoire Thivisol) visits a cemetery and cries for her mother, who suddenly appears to comfort her and ask her to live her life and not be sad all the time. Her mother (played by Marie Trintignant) says she cannot keep coming back, so Ponette must move on and go be happy with her father.  Then it appears that her mother gives her a sweater that she did not bring to the cemetery, and her father comments when he sees her that “I haven’t seen that sweater in a while.”