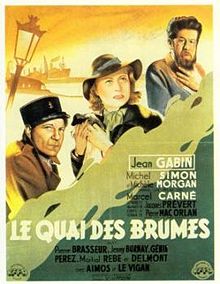 On a foggy night, Jean (Jean Gabin), an army deserter, catches a ride to the port city of Le Havre. Hoping to start over, Jean finds himself in a lonely bar at the far edge of town. But, while getting a good meal and civilian clothes, Jean meets Nelly (Michèle Morgan), a 17-year-old who has run away from her godfather, Zabel, with whom she lives. Jean and Nelly spend time together over the following days, but they are often interrupted by Zabel, who is also in love with her, and by Lucien, a gangster who is looking for Nelly’s ex-boyfriend, Maurice, who has recently gone missing. Jean resents the intrusions of Lucien and twice humiliates him by slapping him. When Nelly finds out that her godfather killed Maurice out of jealousy, she uses the information to blackmail him and prevent him from telling the police that Jean is a deserter. Though the two are in love, Jean plans to leave on a ship for Venezuela. At the last minute Jean leaves the ship to say goodbye to Nelly; he saves her from the hands of Zabel, whom he kills, but when they go out on to the street he is shot in the back by Lucien and dies in her arms.