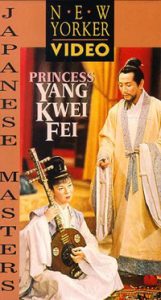 In eighth-century China, the emperor (Masayuki Mori) mourns the loss of his wife. The opportunistic Yang family offers a distant cousin as a concubine in hopes of gaining influence at court. Captivated by the girl, Princess Yang Kwei Fei (Machiko Kyō), the emperor places family members in the court. But General An Lu Shan desires more power, and leads a popular revolt against the emperor. To buy the protection of his Imperial Guards, the emperor must make a dear sacrifice.

The Japanese director Kenji Mizoguchi’s 1955 adaptation of a ninth-century Chinese poem, about a Tang-dynasty emperor who sacrificed his reign for the love of a woman who was forced to sacrifice her life, is a grand pageant of tragic conflict between three kinds of power—erotic, artistic, and political. At the start, the emperor, a musician and composer, an effete connoisseur of nature and culture, is in inconsolable mourning for his late wife and rejects all feminine attentions. But an ambitious general, hoping to curry favor with the ruler, finds and grooms an attractive young kitchen servant and presents her to the emperor as the noblewoman of the title. A star is born: the emperor is enticed by her simple, graceful spontaneity, but the sumptuous refinements with which he soon surrounds her and her family spark an uprising by the tax-burdened populace. Mizoguchi’s incisive sense of historical analysis is equaled by his exaltation of love and his recognition of the disproportionate price that women pay for pleasure and position. As injustice begets injustice and a corrupt regime besmirches beauty, Mizoguchi gives his lovers the last laugh, in one of the most jubilantly derisive endings in the history of cinema.