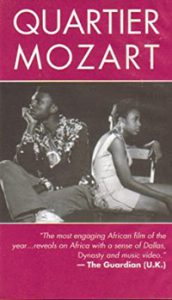 A young girl crosses paths with a witch who has the power to satisfy her curiosity about men by changing her into one.  Re-imagining several folk tales into a contemporary setting, director Jean-Pierre Bekolo’s first feature film recounts the story of a young girl who is magically transformed into a swaggering Casanova nicknamed “My Guy.” While the focus is on “My Guy,” several offbeat characters crowd the show, including a polygamist police chief whose daughter “My Guy” seduces and a witch whose handshake can make men’s genitals disappear. The combination of highly westernized characters and the charged folk tale atmosphere form a vision of today’s Africa. Quartier Mozart is as humorous as it is revealing and depicts the powerful influence of western pop culture.