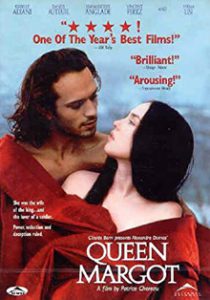 Young Queen Margot finds herself trapped in an arranged marriage amidst a religious war between Catholics and Protestants. She hopes to escape with a new lover, but finds herself imprisoned by her powerful and ruthless family.

Margot (Isabelle Adjani) is one of several in line to inherit the crown in France, where Roman Catholics and Protestants are jockeying for power. Margot’s mother, Catherine de Medici (Virna Lisi), is intent on seeing her son take the throne once the reign of King Charles IX (Jean-Hugues Anglade) ends. After being married to a man she doesn’t love and starting a tryst with one she does, Margot contends with her mother’s at-all-costs plan to control the political fate of the volatile country.