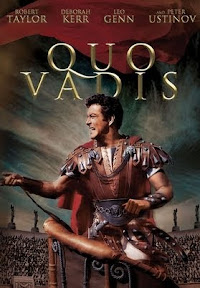 Marcus Vinicius is a Roman military commander and the legate of the XIV Gemina. Returning from wars in Britain and Gaul, he falls in love with Lygia, a devout Christian; in spite of this, he continually tries to win her affections. Though she grew up as the foster daughter of Aulus Plautius, a retired Roman general, Lygia is legally a Lygian hostage of Rome in the old general’s care. Petronius, Marcus’ uncle, persuades Nero to give her to his nephew as a reward for his services. Lygia resents this arrangement, but eventually falls in love with Marcus.

Meanwhile, Nero’s atrocities become increasingly outrageous and his behavior more irrational. After Nero burns Rome and blames the Christians, Marcus sets out to rescue Lygia and her family. Nero arrests them, along with all the other Christians, and condemns them to be slaughtered in his Circus; some are killed by lions. Petronius, Nero’s most trusted advisor, warns him that the Christians will be celebrated as martyrs, but he cannot change the emperor’s mind. Then, tired of Nero’s insanity and suspecting that he may be about to turn on him, too, Petronius composes a letter to Nero expressing his derision for the emperor (which he previously had concealed to avoid being murdered by him) and commits suicide by severing an artery in his wrist. His slavegirl Eunice (who has fallen in love with him) elects to die with him, despite being freed. The Christian apostle Peter has also been arrested after returning to Rome in response to a sign from the Lord, and he marries Marcus and Lygia in the Circus prisons. Peter is later crucified upside-down, a form of execution conceived by Nero’s Praetorian Guard as an expression of mockery.  Marcus and Lygia eventually escape and leave Rome for Marcus’ estate in Sicily.