Rabbit on the Moon 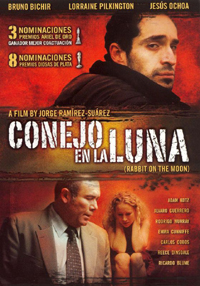 Though around them a criminal world seethes, Julie and Antonio are a young and loving couple with a new baby and a solid, white-collar sense of stability. But when a loose social connection suddenly ties them to a major political assassination, the two become innocents desperately trying to adapt to a world of murderous politicians and police that, moment to moment, threatens their lives.

This is a world in which scapegoats are sought to cover up a multitude of crimes, a world where police violence goes unpunished and the trafficking of children is nothing out of the ordinary.  All at once, the innocent Antonio and Julie are at the mercy of a network of murderous politicians and their police force cronies. Before long, they find themselves no longer merely fighting for justice but struggling to survive.