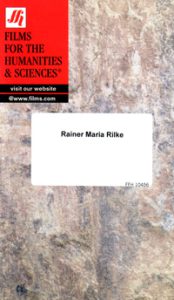 Rainer Maria Rilke’s supreme mastery of the German language, which he manipulated with an unprecedented subtlety and plasticity, forms the bedrock upon which his reputation as one of the 20th century’s finest and most influential poets is built. This program interweaves biographical details of Rilke’s restless and emotionally troubled life, extracts from his letters, and readings from the Duino Elegies—his culminating literary achievement. Imbued with the most minute shades of meaning, Rilke’s intensely personalized elegies stand as a monument to his great technical ability and his complex poetic vision.  (In English)