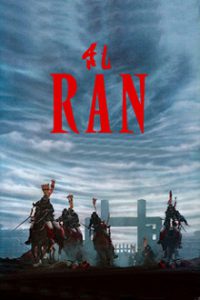 In Medieval Japan, an elderly warlord retires, handing over his empire to his three sons. However, he vastly underestimates how the new-found power will corrupt them and cause them to turn on each other, and him.

At the age of seventy, after years of consolidating his empire, the Great Lord Hidetora Ichimonji (Tatsuya Nakadai) decides to abdicate and divide his domain amongst his three sons. Taro (Akira Terao), the eldest, will rule. Jiro (Jinpachi Nezu), his second son, and Saburo (Daisuke Ryu) will take command of the Second and Third Castles but are expected to obey and support their elder brother. Saburo defies the pledge of obedience and is banished.  Majestic in scope, the film is Kurosawa’s late-life masterpiece, a profound examination of the folly of war and the crumbling of one family under the weight of betrayal, greed, and the insatiable thirst for power.