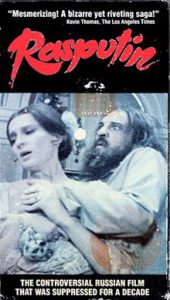 As an adviser to the emperor Nicholas II (Anatoliy Romashin), mystic Grigori Rasputin (Aleksei Petrenko) holds great influence over the empire. However, many in St. Petersburg, Russia, begin to regard Rasputin, with his strange practices and mesmerizing qualities, as a liability and plot to assassinate him. When Rasputin, known to many as the “‘Mad Monk,” leads Nicholas to embrace an ill-conceived military strategy, a group of determined conspirators set down a plan to eliminate him.

The story-line of the film follows the final months of 1916 up to the murder of Rasputin; some events have been telescoped into this time though they actually happened earlier, during the war.  Rasputin’s effect on people around him is shown as almost hypnotic, and the film avoids taking a moral stance towards him, breaking not only with Soviet history but also with how he was regarded by people near the court at the time, some of whom regarded him as a debilitating figure who disgraced the monarchy and hampered the war effort.