Record of a Living Being 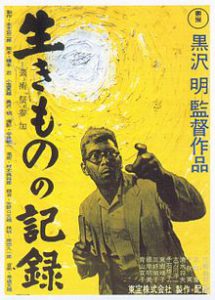 Kiichi Nakajima, an elderly foundry owner, is so frightened and obsessed with the idea of nuclear annihilation that his family decides to have him ruled incompetent. Nakajima’s fervent wish is for his family to join him in escaping from Japan to the relative safety of South America. Harada, a civil volunteer in the case, sympathizes with Nakajima’s conviction, but the old man’s irrational behavior prevents the court from taking his fears seriously.  The most frightening aspect of Kurosawa’s film is not the threat of nuclear annihilation, but the proliferation of man’s inhumanity and greed, expressed by the family’s zeal to commit their father and keep their inheritances intact.