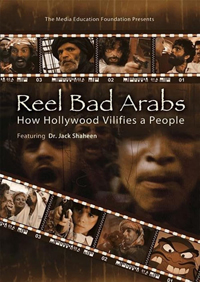 Reel Bad Arabs takes a devastating tour of the American cinematic landscape, moving from the earliest days of silent film to today’s biggest Hollywood blockbusters to reveal an astonishing and persistent pattern of slanderous Arab stereotyping.  Featuring acclaimed author and Hollywood film consultant Dr. Jack Shaheen, the documentary exposes American cinema’s long love affair with Arab villainy and buffoonery, from over-sexed Bedouin bandits and submissive maidens to sinister sheikhs and blood-thirsty terrorists.  Along the way, the film provides striking insights into the origin of these images, their disturbing similarities to anti-Semitic and racist stereotypes from the past, and their political resonance during key moments of conflict in U.S. history.  In the end, Shaheen inspires us to think critically about the destructive social and political effects of Hollywood’s projection of Arabs, challenging us to envision counter narratives that do justice to both the diversity and humanity of Arab people, and the reality and richness of Arab history and culture.