Requiem for a Spanish Peasant 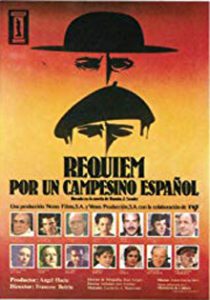 Mosen Millan (Antonio Ferrandis), a Roman Catholic priest in a small Spanish village, is preparing to lead a service celebrating the life of Paco (Antonio Banderas), an outspoken young peasant who fought fiercely against an unjust local landowning system.  As Millan looks back on Paco’s sad story, from his early years to his young adulthood and his marriage, he realizes that he had a role in the youth’s death at the hands of soldiers in the Spanish Civil War.

Hypocrisy and betrayal are the two dramatic pivots in this effective, emotionally gripping tragedy about the life and death of Paco, a Spanish peasant who had been fighting against the feudal landowning system that kept farmers impoverished. Paco’s life is told in flashbacks by a priest who is seen officiating at an anniversary mass attended by three wealthy landowners and no one else. The priest recalls Paco’s baptism, his communion, his marriage ceremony and then his work for the peasants as he advocated and led them in a land-reform movement. The rest of the story will rest heavy on the priest’s conscience, as he looks out at his empty church.