Roman Invasions – The Arrival of Caesar 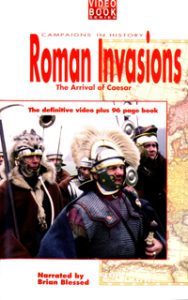 In 55 BC the ambitious Julius Caesar, Emperor of Rome turned envious eyes towards the mysterious Isle of Britain.  Within a few short years, the mighty Roman war machine had tamed the Celtic tribal society and transformed it into a province of the Roman Empire.  Roman Invasions brings alive the incredible stories of some of the decisive moments in warfare by mixing film reconstructions, modern reenactments and period images to provide a powerful record of the most dramatic moments in history.