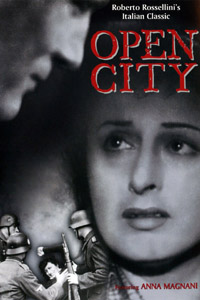 Resistance leader Luigi Ferrari is pursued by Major Fritz Bergmann, a German intelligence officer who wants the names of others in the underground movement. Ferrari enlists the help of sympathetic priest Don Pietro Pellegrini to pass on funds to the fighters in case he is captured, but is accidentally betrayed by a former lover.  Rome Open City is a harrowing drama about the Nazi occupation of Rome and the brave few who struggled against it.  It is a shockingly authentic experience, conceived and directed amid the ruin of World War II, with immediacy in every frame.  Marking a watershed moment in Italian cinema, this galvanic work garnered awards around the globe and left the beginnings of a new film movement in its wake.