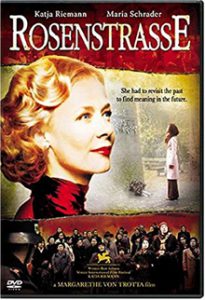 In the present day, a widow, Ruth, mourns the death of her husband. She covers up the TV set and all the mirrors in the house.  Her grown children are baffled by this behavior, asking why their mother has suddenly become Orthodox Jewish. The mother will not discuss her past, but her daughter wants to know what happened. Learning of a woman (Lena) who “saved” her mother during the war, she goes to Germany to learn the whole story. She finds Lena, who willingly reminisces about World War II, about her situation and her mother’s childhood as a Jew growing up in Germany during the war. Lena tells Hannah about Ruth’s role in the Rosenstrasse protest of 1943, which aimed to free Jewish husbands from jail and prevent their deportation. The principal focus of the film addresses what happened to those who were in a mixed marriage (“Aryan”/Jewish).  Amid constant flashbacks, the film pieces together the story of the Rosenstrasse protest, where the women waited for seven days and nights outside of a Nazi jail for their Jewish husbands. The protests took place in Berlin during the winter of 1943.