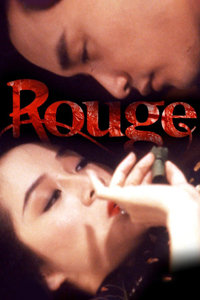 In 1987 Hong Kong, newspaperman Yuen (Alex Man) and his girlfriend, Chor (Emily Chu) are drawn into a doomed 1930s romance when the ghost of courtesan Fleur (Anita Mui) places an advertisement, looking for her lost lover Chan Chen-Pang (Leslie Cheung). She has waited in the afterlife for Chan for 53 years and believes he has become lost.  Chan was the playboy son of a wealthy family, but longed to be an actor, who met and fell in love with talented, beautiful Fleur in one of Hong Kong’s tea-houses. Realizing their romance would never be accepted, the couple committed suicide by opium overdose in order to be together in death.

Pragmatic Yuen and Chor become dazzled by the romance of Fleur’s story and the ghost’s glamorous beauty, but as their search for Chan reveals the truth, that Chan did not die with Fleur, frittered away his inheritance and now lives impoverished as a Chinese opera stand-in, they see the value of their own, honest relationship.  The title of the film refers to a rouge case that Chan gave to Fleur, which she returns to the now-elderly, guilt-wracked man, before leaving the living world.