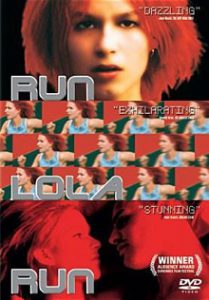 In this visually and conceptually impressive film, two-bit Berlin criminal Manni (Moritz Bleibtreu) delivers some smuggled loot for his boss, Ronnie (Heino Ferch), but accidentally leaves the 100,000 mark payment in a subway car. Given 20 minutes to come up with the money, he calls his girlfriend, Lola (Franka Potente), who sprints through the streets of the city to try to beg the money out of her bank manager father (Herbert Knaup) and get to Manni before he robs a store to get the money. Three different alternatives are explored that depend on some minor event along Lola’s run.