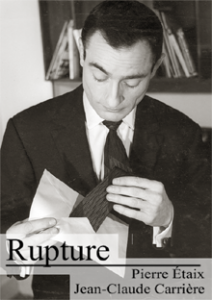 In 1961, Pierre Étaix co-wrote and co-directed an 11-minute short subject entitled Rupture.  Apart from the opening scenes in which Étaix dodges cars and pedestrians to hurry home to read his mail, the film is basically a silent, one-man show.  Inside his apartment, he anxiously opens a letter from his sweetheart, only to find that she has broken up with him (conveyed wordlessly when Étaix pulls a copy of his photograph from the envelope that has been ripped in two).  The remainder of the film is an increasingly frustrating attempt by Étaix to write and seal a nasty letter in response, while all manner of inanimate objects (a broken fountain pen, a temperamental ink well, stuck stamps, and a broken desk) refuse to work as intended.  The premise is simple, but there is nothing simple about the expert execution of the ingenious gags.