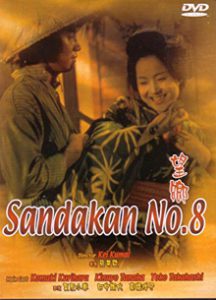 An old Japanese woman tells a writer about her past, in which she was shipped to Borneo and forced to become a prostitute.

Tricked into sexual slavery as a child by an amoral human trafficker who lured her with promises of money to be made overseas, Osaki found herself in Borneo and a prisoner of “Sandakan No. 8” which was one of 10 numbered brothels on the island largely catering to Japanese travellers overseas, facilitating the expansion of the Japanese empire as accidental emissaries and ports of call. When Osaki was a child, Japan was a poor country and it was considered normal to sell one’s daughter in order to feed a family. Working overseas carried with it a kind of cache though no one, except perhaps her brother, seems to be fully aware of what Osaki is going to and she herself has not in any way chosen or consented to become a sex worker. When she eventually returns to Japan, she finds herself unwelcome in her brother’s house, which her money paid for, because of the shame associated with those who have “worked away.”  Even 50 years later, she finds herself living alone, all but disowned by her only son, on the outskirts of her childhood village ostracized by the “respectable” townspeople.