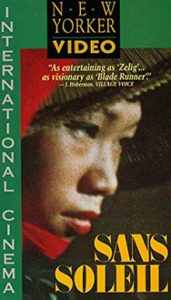 This experimental film by acclaimed French director Chris Marker collects footage recorded in various countries around the world and presents it in collage-like form. The movie features no synchronized sound, but instead ties the various segments together with music and voice-over narration, which ponders such topics as memory, technology and society. It is a meditation on the nature of human memory, showing the inability to recall the context and nuances of memory, and how, as a result, the perception of personal and global histories is affected.  As the scenes shift, locations range from Japan to Iceland to Africa, creating a truly international work.

Sans Soleil is often considered to be one of the greatest films ever. In a 2014 Sight and Sound poll, film critics voted Sans Soleil the third best documentary film of all time