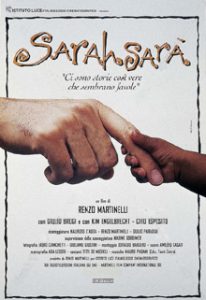 A handicapped Sudanese girl (Kim Engelbrecht) becomes a champion swimmer with the help of a burnt-out sportswriter (Giulio Brogi).

The film, inspired by the true story of Sarah Gadalla Gubara starts out in Namibia, Africa, where Gershe, a reporter whose car has broken down, is almost killed by a passing ambulance.  After following it to the hospital, he witnesses the drama of two Indian immigrants, Vernon and Karima, whose little daughter Sarah, is condemned to limping for life as the result of an accident.

Ten years later, Sarah has turned into an excellent swimmer.  After she wins second place in school trials held in Cape Town, her parents decide to look for a trainer. Sarah’s life crosses paths again with Gershe, the reporter who has been a swimming instructor in the past.  Although initially skeptical, he finally agrees to train the young Sara.  Just as Sarah is about to participate in her most important national trial, her father, Vernon, is killed in a robbery attempt. Despite these challenges, Sarah succeeds in turning her dream into reality as she participates in the «Capri-Napoli» Italian marathon, a swimming race of 35km in open seas.