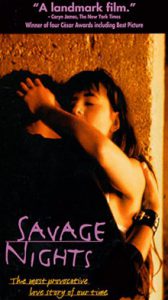 Savage Nights is the story of a bisexual filmmaker who celebrates his promiscuity and engages in unsafe sex even after he discovers he has AIDS. The movie is the loosely autobiographical story of Cyril Collard, who based it on his own novel, wrote it, directed it, starred in it, and died of AIDS just four days before it won the Cesar prize as France’s best film of the year.

Handsome, but self-centered, childish and hedonistic, Jean has a complicated sex life. He is bisexual and HIV positive. During a casting session he meets Laura, a lively, eighteen-year-old aspiring actress. Captivated by her charm, Jean soon is pursuing her and she quickly falls in love with him. They start a passionate affair. At the same time, the restless Jean pursues a relationship with Samy, a young rugby player. Samy, who has emigrated with his mother and brother from Spain, is unemployed and equally troubled. He is straight and although living with his girlfriend, Marianne, he has no qualms about his homoerotic relationship with Jean, who has a big crush on him.  In the end, Jean has to come to grips with his HIV-positive personal crisis and a tough choice between Laura and his male lover Samy.