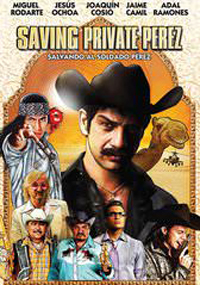 Saving Private Perez is a 2011 Mexican Western comedy film. The movie follows Julian Pérez, a Mexican organized crime leader, who is asked by his mother to rescue his brother, Juan Pérez, a United States Marine Private fighting in Iraq. Julian sets up a team of four hand-picked Mexican men for the mission: two fat old men, a convicted murderer who is rescued from prison, and Julian’s best friend, a Native American tomato farmer. They travel to Turkey and meet Sasha, a Russian druggie.

The film bogs down when this B team arrives in the desert, spooling out in a random series of dull shootouts (Mr. Gómez shows no knack for action) and mildly funny visual jokes. (When a local fixer proudly serves them a pot of his mother’s soup, the Mexicans furtively pull out a bottle of hot sauce; later it will be used as an instrument of torture.) Beyond Julian, the characters are essentially interchangeable ciphers. If you don’t get the jokes, there isn’t a whole lot else to get, and it’s a safe assumption that non-Latino, non-Spanish-speaking viewers are going to miss a lot of them.