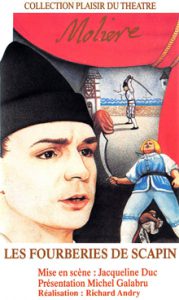 Scapin constantly lies and tricks people to get ahead. He is an arrogant, pompous man who acts as if nothing were impossible for him. However, he is also a diplomatic genius. He manages to play the other characters off against each other very easily, and yet manages to keep his overall goal (to help certain young couples) in sight.

In their fathers’ absence, Octave has secretly married Hyacinthe and Léandre has secretly fallen in love with Zerbinette. But their fathers return from a trip with marriage plans for their respective sons. Scapin, after hearing their many pleas for help, comes to their rescue. Thanks to his many tricks and lies, Scapin manages to come up with enough money from the parents to make sure that the young couples get to stay married. Yet, no one knows who Hyacinthe and Zerbinette really are.  The film ends in the classic “And they lived happily ever after,” and Scapin is even seated at the head of the table during the final feast (even though he has to fake a fatal wound to make it happen).