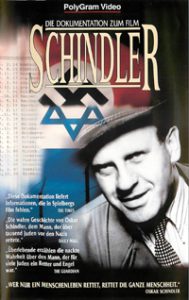 Steven Spielberg celebrates the biggest triumph of his career with ‘Schlndler’s List’ – awarded 7 Oscars. His impressive masterpiece is not the first film about this legendary Oskar Schindler.  A few years ago, writer, producer and director Jon Blair made this now award-winning documentary about Schlndler’s life, based on Thomas Keneally’s factual novel.  During his research, Blair tracked down more than 40 survivors from the time. He spoke to Schlndler’s widow Emmlle, his lover Ewa Klsza, Ruth ‘Majola’ Kaiser, the girlfriend of the camp commandant Amon Göth, and many of the rescued, who later declared themselves as ‘Schndlerjuden.’  His exclusive interviews with the people who knew and loved Schindler, authentic footage collected from around the world, and footage of Schindler just before his death make ‘Schindler’ a deeply moving contemporary documentary.  (Recorded in PAL in German)