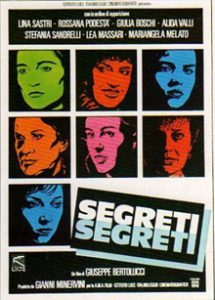 Young terrorist Laura shoots both a judge and a gang member, and over time her violent act becomes a thread linking the lives of several other women, ultimately directing all of their fates.

Secrets, Secrets is a women’s film if considered quantitatively. The all-female cast has seven of Italy’s best actresses with Alida Valli as the grand dame to current stars Stefania Sandrelli and Mariangela Melato, cult favorites Lea Massari and Rossana Podesta, and two bright newcomers, Lina Sastri and Giulia Boschi. Giuseppe Bertolucci (younger brother of Bernardo and co-writer of 1900 and Luna) gets gainful, dynamic performances from his septet in a story that centers around Laura (Sastri), a young terrorist who executes one of her gang during an assassination attempt on a judge. How this one misguided deed effects the lives of ordinary people preoccupies the rich, polished narrative of Secrets, Secrets. Bertolucci’s best work to date is not a political thriller, per se, but an examination of the public’s intrusion into the private realm. Laura’s outrageous act determines the fate of each woman, sometimes to tragic end. Her continued presence uncovers conspiracies of silence and collusion and a frightening self-revelation. Secrets, Secrets suggests that some secrets are better left concealed.