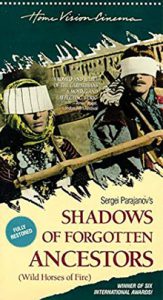 Deep in the Carpathian Mountains of 19th-century Ukraine, love, hate, life, and death among the Hutsul people are as they’ve been since time began. While young Ivan’s mother mourns her husband’s brutal murder, Ivan is drawn to Marichka, the beautiful young daughter of the man who killed his father. But fate tragically decrees that the two lovers will remain apart. In preparation for their marriage, Ivan leaves the village to work and earn money for a household. While he is gone, Marichka accidentally slips into a river and drowns while trying to rescue a lost lamb.  Ivan returns and falls into despair after seeing Marichka’s body.

He continues to work, enduring a period of joyless toil, until he meets another woman, Palahna, while shoeing a horse. Ivan and Palahna get married in a traditional Hutsul wedding in which they are blindfolded and yoked together.  The marriage quickly turns sour, however, as Ivan remains obsessed with the memory of Marichka. Estranged from her emotionally distant husband, Palahna becomes involved with a local sorcerer, while Ivan begins to experience hallucinations. Unhappily married to another woman and cursed by a sorcerer in this life, Ivan’s obsession with his lost love lures him ever closer to a reunion with Marichka in death.