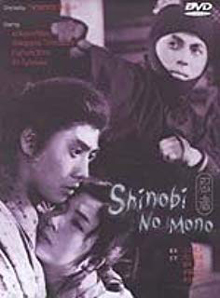 Shinobi no Mono is a series of eight jidaigeki (Japanese historical dramas) which were released in Japan over a four year period from 1962 to 1966 by Daiei Pictures.  Based on a series of novels by Tomoyoshi Murayama, the plot of the first few films focuses on a ninja named Ishikawa Goemon and his struggle to survive during Japan’s warring states period. The films star Ichikawa Raizo who plays Ishikawa Goemon as well as several other characters throughout the series.

In this film, Ishikawa Goemon, a talented young ninja, becomes ensnared in a twisted scheme to assassinate Oda Nobunaga, an evil warlord bent on ruling feudal Japan with an iron fist. Deceit, treachery, and entire gangs of enemy ninja lurk around every corner as Goemon travels the countryside to complete his task, win back his honor, and save his skin!