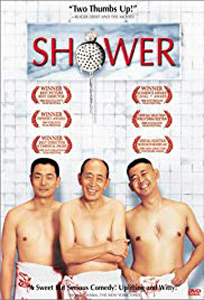 Shower is a heartwarming story that examines the current state of Chinese culture where cherished traditions are being abandoned by the modern world.  A young, wealthy businessman’s icy attitude toward his working-class background thaws quickly as he is forced to reconnect with his elderly father and mentally challenged younger brother, who together run a public bathhouse.

Shenzhen businessman, Da Ming, goes home to Beijing when he thinks his father has died. He finds his father hard at work at the family’s bathhouse (the false message was a ruse of Da’s mentally-handicapped, exuberant brother, Er Ming, to get Da home). Da stays a couple days, observing his father being social director, marriage counselor, and dispute mediator for his customers and a boon companion to Er. Da is caught between worlds: the decaying district of his childhood and the booming south where he now lives with a wife who’s not met his family. When Da realizes his father’s health is failing and the district is slated for razing, he must take stock of family and future.