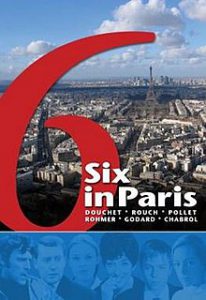 Six in Paris is a French anthology film made in 1965 composed of six vignettes set in different sections of Paris, by six directors.  This collection features six major French New Wave directors working at the top of their collective game to create a beautiful record of Paris in the ’60s. Each filmmaker took a different neighborhood and composed a short film about it—the results are fascinatingly varied and rich in character and story. The directors include Jean-Luc Godard whose segment is a romantic comedy set in the sexually frisky Montparnasse; the documentary master Jean Rouch, who follows a young girl through the Gare du Nord in a breathtaking tracking shot; Claude Chabrol, whose Hitchcockian segment exposes the interior of an unhappy bourgeois family in La Muette; Jean-Daniel Pollet, whose hilarious comedy of a timid guy’s encounter with a brassy streetwalker illustrates the Rue Sant-Denis; Jean Douchet, whose Saint-Germain-des-Prés segment tells the story of American girls who get taken for a ride by French playboys; and Eric Rohmer, whose segment is about a salesman who gets into a fight with a drunk in the Place de l’Étoile, and fears he might have killed him.