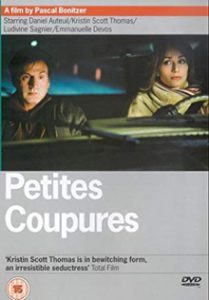 Small Cuts opens with journalist Bruno (Daniel Auteuil) and his wife, Gaelle (Emmanuelle Devos), having it out over his affair with Nathalie (Ludivine Sagnier). The tides of history are playing havoc with his convictions and after an invitation from Bruno’s uncle Gerard (Jean Yanne), Bruno and Nathalie travel to the town where Gerard is mayor. Bruno learns that his aunt is having an affair. Gerard is aware of his wife’s infidelity and asks Bruno to take a letter to his wife’s lover, a doctor named Verekher (Hanns Zischler). On his way to the doctor’s home he meets Marie (Dinara Droukarova), and once there he encounters the mysterious Beatrice (Kristin Scott Thomas).  Suddenly he is more lost than ever.