So Close to Paradise 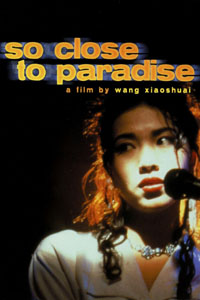 So Close to Paradise takes place in the 1980s in the central Chinese city of Wuhan. The film follows two young migrant workers. Young innocent Dong Zi (Shi Yu) is a pole carrier or coolie eking out a meager existence carrying heavy loads from place to place. His friend and roommate Gao Ping (Guo Tao) is from the same home village, but unlike Dong Zi, is older, more cynical, and has fallen into a life of petty crime. As the film begins, Gao has been cheated out of a small amount of money from a local gangster Su Wu (Wu Tao). Enraged, Gao drags his friend into Wuhan’s underworld. Their first stop is a local bar, the Li Li Club where they go looking for Ruan Hong (Wang Tong), a Vietnamese singer who is said to know Su Wu. After speaking with her, Gao and Dong kidnap the young woman and drag her to their apartment. Gao asks Dong to leave the room after which he proceeds to rape her, while Dong peers through a crack in the door. Soon afterwards, however, Gao and Ruan suddenly become lovers, much to Dong Zi’s surprise and consternation.

As Gao and Ruan continue their relationship, Dong Zi becomes sullen and seemingly jealous, though it is unclear of whom. Later Ruan and Gao appear to get in a fight as Gao Ping continues to obsess over the small amount of money he has lost. Enraged, Ruan leaves the apartment with a curious Dong Zi in tow. The two talk throughout the night and Ruan reveals that she only wants to become a professional singer, though such dreams seem out of reach.

Tensions rise, however, when it is discovered that Ruan Hong is the kept woman of Su Wu’s boss. Realizing the danger, Gao Ping disappears just as the boss and the police begin to close in on him. Secretly communicating with Ruan, Gao promises to take her away but fails to show up on the appointed day. Ruan is subsequently arrested when the Li Li Club is seized as a den of prostitution. When Gao finally comes back to his apartment, he is caught by the Boss whose men beat him to death.

The film then ends as Ruan, now released from prison, returns to the apartment of Dong Zi and Gao Ping. For Dong Zi, she is the only person he knows in the city. They reminisce over the dead Gao, and Ruan thanks Dong Zi for “kidnapping” her that night. Before she leaves, Dong Zi gives her a walkman with a tape of one of her songs.