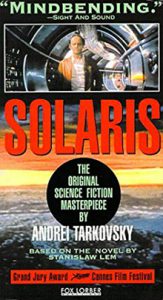 The Solaris mission has established a base on a planet that appears to host some kind of intelligence, but the details are hazy and very secret. After the mysterious demise of one of the three scientists on the base, the main character is sent out to replace him. He finds the station run-down and the two remaining scientists cold and secretive. When he also encounters his wife who has been dead for ten years, he begins to appreciate the baffling nature of the alien intelligence.