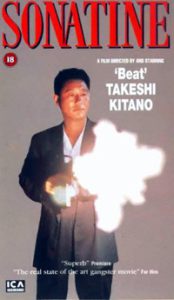 Murakawa, a Tokyo-based yakuza enforcer, has grown tired of gangster life. He is sent by his boss to Okinawa, supposedly to mediate a dispute between their allies, the Nakamatsu and Anan clans. Murakawa openly suspects the assignment is an attempt to have him removed and even beats up one of his colleagues, Takahashi, but ends up going with his men. He finds that the dispute is insignificant; the group’s temporary headquarters is bombed and his men are ambushed in a bar, leaving several of them dead.

Fleeing to the seaside, the survivors take refuge in a remote beach house belonging to a brother of one of the Nakamatsu members and decide to wait for the trouble to blow over. Whilst spending time at the beach, the group engages in childish games and pranks and begin to enjoy themselves. However, the games frequently have a violent undertone. When two of his men alternate shooting at a beer can on each other’s head, Murakawa turns it into a game of Russian roulette. Putting the gun to his head, he pulls the trigger on the last chamber, which is only then revealed to be empty.

Learning that Takahashi is arriving in Okinawa, Murakawa and two of his surviving men visit his hotel.   Unable to find him at first, they unexpectedly run into Takahashi and the assassin in the elevator, which results in a shootout, killing the assassin and Murakawa’s men. Murakawa learns from interrogating Takahashi that their boss had intended all along to partner with the Anan clan and had sent Murakawa on a suicide mission to take over his turf. He also learns that the boss will be meeting with the Anan that night in a hotel. Takahashi is killed and Murakawa sets off with the only survivor of the group, a member of the Nakamatsu clan, who helps him by rigging the electricity in the hotel to go off at a certain time. Murakawa tells the woman that he might come back.

Later that night, Murakawa goes into the hotel and slaughters both clans with an assault rifle. The next morning, while the woman continues to wait for him, Murakawa is dropped off nearby. He gets into the woman’s car alone and commits suicide by shooting himself in the head.