Spain in a Day 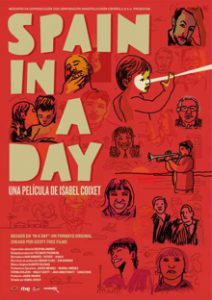 Based on the concept of the film Life in a Day, directed by Kevin Macdonald and produced by Ridley Scott, Spain in a Day brings to life the history of the Spanish (in Spain and abroad) with the aim of creating a movie recorded by themselves, which are also reflected the fears and dreams of the current Spain for Spaniards tomorrow, at a time of great social and cultural changes. The most innovative social film created and filmed by the Spanish, the most extraordinary cinematic social event ever held in Spain.