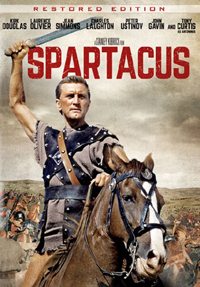 The film traces the story of the slave Spartacus, who earns a reputation for courage as a gladiator while a possession of the wealthy Lentulus Batiatus. The fiercely independent slave seeks freedom for himself and his downtrodden companions. He manages to escape and frees other slaves, forming a formidable army of rebels. With the citizens of Rome frightened by the rebellion, Gen. Marcus Licinius Crassus is assigned to crush the insurgents, but Spartacus and his army defeat the Romans in numerous battles. However, they are ultimately caught in an inescapable trap and are slaughtered. Spartacus is crucified, but as he is dying, he has the satisfaction of discovering that his wife Varinia and their baby son have been granted freedom as citizens of Rome.