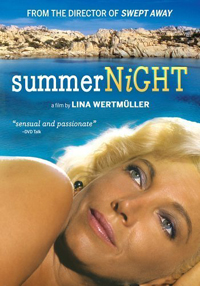 Mariangela Melato (Swept Away) stars as Signora Bolk, a self-made tycoon interested in ecological preservation. She is fed up with the terrorists who poach Italy’s rich beauty, and as part of a crazy retaliation scheme she hires a former CIA agent to abduct the number one violator, Giuseppe ‘Beppe’ Catania. Catania is taken to her villa on a private island where he insists that as a man, he cannot go without sex. She relents and hires two prostitutes to pleasure him. Blindfolded and chained, Beppe realizes that the third woman is none other than the woman who kidnapped him and agrees to pay the $100 million but only with a twist.