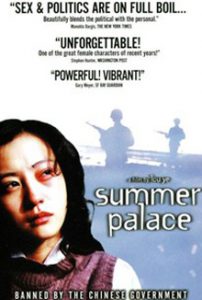 Country girl Wei leaves her village to attend university in Beijing, where she soon discovers an intense world of sexual freedom. She falls madly in love with Zhou, another student and, driven by wild passion, they play dangerous games with each other. When he is sent to a military camp and then to Germany after a violent protest, she finds a job and a new lover but cannot forget him. Once unrest begins in Berlin, Zhou decides to return to China and to Wei.  The film follows the eventual disillusionment of these young idealists after the crackdown (following the Tienanmen Square protests) as the years progress through the 1990s and into the 2000s (decade). The film is named after the Summer Palace located in Beijing.