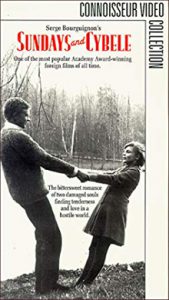 After killing a child when his plane crashes in a Vietnamese village, Pierre suffers from delayed stress and partial amnesia. Returning to France, he lives like a vegetable until he meets a young girl who has been dumped by her father at a boarding school. Posing as her father, Pierre contrives to meet the girl every Sunday, to play with her and perhaps recover his memory. The innocent friendship is misread by nearly everyone, even people who know Pierre well. A classic of old French art films.